PRESLEY’S ‘NOW OR NEVER’ BREAKS ALL SPEED RECORDS FOR SALES! 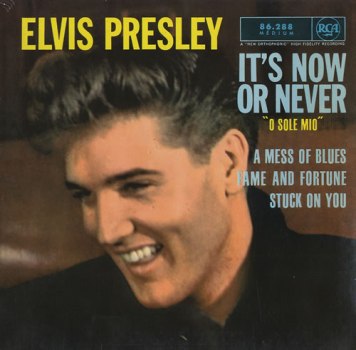 ELVIS PRESLEY – THE UNDOUBTED KING OF RECORD STARS. THAT IS HOW HIS LATEST BRITISH DISC TRIUMPH HAS BEEN HAILED. THE SALES IN THIS COUNTRY OF “IT’S NOW OR NEVER” HAVE BEEN FASTER THAN ANY PREVIOUS HIT ANYWHERE IN THE WORLD. IT IS VIRTUALLY CERTAIN HE WILL GET A GOLD DISC WITHIN A MONTH OF ISSUE – HIS FIRST FROM BRITISH SALES ALONE.

Less than two weeks after it had been released, sales exceed three-quarters of a million and the waxing is selling in such quantity that by early next week, demand could have boosted sales to a million!

Presley broke all records with an advanced order of more than 548,000 for the disc by its issue on October 28. On Wednesday of this week, just twelve days later, Decca, who distribute Presley’s label RCA, had received orders from dealers for 771,100 copies.

One dealer in a London suburb reported selling twelve times more copies of “It’s Now Or Never” than any other disc last Saturday. Another, in an effort to cope with the fantastic crowds thronging his shop for two hours, only admitted those who wanted the Presley disc.

The previous fastest-selling disc was Harry Belafonte’s “Mary’s Boy Child” (another RCA issue) which between mid-October and December, 1957, sold a million copies in this country alone.