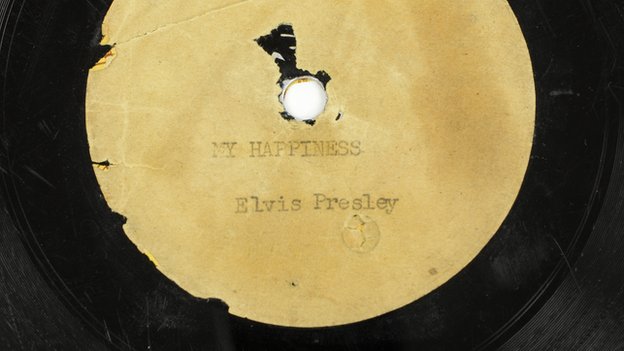 The first record Elvis Presley ever made is to be sold at auction.

In June 1953, an 18-year-old Presley went to the Memphis Recording Service to record My Happiness and That's When Your Heartaches Begin onto acetate.

He wanted to find out what his voice sounded like on record and paid $4 for the session.

He returned to record sessions for Sun Records the following year and went on to become the "king of rock 'n' roll". The auction will take place in January.

It will be one of 68 rare artefacts to be auctioned at his former home of Graceland in Memphis.

The announcement from Graceland described the record as "part of the 'Holy Grail' of artefacts in rock 'n' roll history".

Presley was said to have made the recording partly as a present for his mother.

But the family did not have a record player, so he took it to a friend's house to listen to the results of the session and left it there.

This will be the first time it has come up for public sale.

The other items in the auction will include his driving licence, issued in 1952, a 1955 contract to perform on the Louisiana Hayride radio and TV programmes and a jacket worn in the film Viva Las Vegas.

The auction will take place on 8 January, what would have been the star's 80th birthday. The items have not been given estimated values.